We left the Hampton Hotel and headed into Muncie, to pick up the Cardinal trail which is part if the Rails to Trails network and would form a big part of our route today

Our hotel was on a junction taking a fairly major road over to the airport. We were just outside the hotel and waiting at a red light when Matthew pointed to a group if about 8 or 9 little ducklings that were scurrying about on the other side of the road. They were obviously frightened – darting about and changing directions – all on the road at the junction. Cars were stopping and slowing down and trying to drive around them. Cars coming across the junction from the other direction couldn’t see the ducklings, so they were whizzing past. The ducklings were running underneath the cars and I just couldn’t look any more. I wanted to go and do something – but the traffic made it impossible to get over the road on red, even if I’d managed to reach them – what would I do? Try herding ducklings off a main road with traffic thundering by? Where would I take them? Once the lights changed we had to move forward and with a very heavy heart I passed by on the other side – well actually it was worse than that, I passed by on the same side but still failed to help. I felt quite guilty and kept hoping that in one of the cars that were manoeuvring around the ducklings would be someone who would know how to rescue them. I imagine that they’re all dead now :(

Muncie – is a nice-looking little town. We passed Ball State University, where there seemed go be some kind of sporting event taking place with lots of competitors warming up. We rode into the centre along the river, where there was a beautiful park and cycleways. We saw a big sign for the Muncie Orchestra Concert – that’s a good sign to see! There was a huge, nice- looking bicycle shop, but no time to visit, unfortunately. 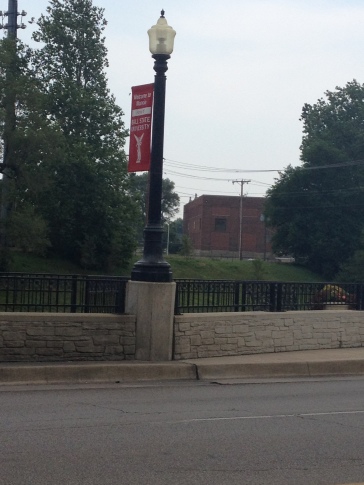 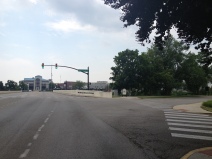 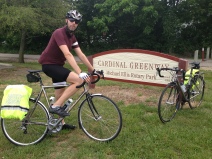 For any sociologists out there, you may be interested to learn that Muncie was chosen as the site of a series of in-depth anthropological studies of typical US Middle-American town life from the 1920s to 2000, was known as ”Middletown’. In 1929, Helen and Robert Lynd published ‘Middletown: A Study in Contemporary American Culture’; they returned to re-observe the community during the depression and published ‘Middletown in Transition: A Study in Cultural Conflicts’, in 1937. A third study by Theodore Caplow followed: ‘Middletown Families’ in 1982 and in the following year ‘All Faithful People’. In 1998 Capliw began another study: Middletown IV, which i think was made into a tv documentary, but I’ve not seen it.

As we were heading out of town, two boys on bicycles came out of a side-street and made to race with us. They had big grins on their faces as they bent down to pedal furiously to their impossible task of keeping up with us. It’s an amazing aspect of the human spirit I think – often we’ll do something even though we know that we’ll fail. I asked them where they going on their bicycles today – and they said that they were just biking around. When I said that we were riding to Dayton, one asked rather incredulously, “Dayton Ohio?”. I laughed, “Yes – Dayton, Ohio!”.

On the outskirts of Muncie we rejoined the Cardinal Greenway bike trail, (www.cardinalgreenways.org). We were really looking forward to this part of the ride – almost half of today’s journey was on this beautiful and quiet off-road bicycle track. The Cardinal Greenway is the longest rail-trail in Indiana and stretches 62 miles from Marion through Muncie to Richmond in East Central Indiana. We cycled through the morning and took the trail to Richmond. We saw some amazing animals on the cycle trails – Matthew’s writing about those in a separate blog entry 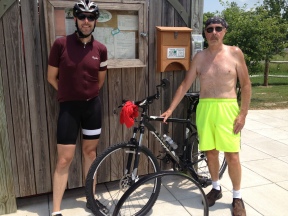 We passed a fellow riding in the same direction as us and wished him good morning. A little further on was a rest area where we could refill our water bottles and I could stretch out a bit. While we were there the cyclist we passed pulled in and we had a chat. He was called Gary, he lived locally and said that he rode on the trail most days to keep fit. He thought that the trails were not as well-used as they could be – we had to agree with that! Gary was retired, but had worked in automobiles, “All those jobs are gone now.” He said, ruefully. I asked Gary about some of the animals we’d seen, he didn’t know what the birds were called, but I described the little furry animal that looked a bit like a chipmunk, Gary said ‘That is a chipmunk!’ Now I should know exactly what a chipmunk looks like because when I was a little boy we had one as a pet – named Harry. Harry lived in a tall tubular cage and I remember he used to go crazy running round and around the cage – much to our amusement, but the poor little thing was probably desperate to get out. I’ve no idea how or why he arrived, or how long he lived – Mum, maybe you can tell me and everyone else all about Harry in the comments section.

We arrived in Richmond and it seemed to be a rather faded place. There were dozens of empty shops on Main Street. This is becoming a familiar sight since we left Chicago – businesses closed, empty stores and lots, people holding ‘yard sales’ in their front garden. It’s obvious that the recession has really hit this part of the country very hard.

I called in at a lovely old book shop ‘A dying breed’ the owner said, for advice about where to eat. He struggled to recommend anywhere, so we stopped for lunch at Kroger’s supermarket. They had a garden table and chairs for sale outside, and we sat there to eat. On the way out on the east side of Richmond were some very grand houses and Glenn Millar Park, with a very nice rose garden. Not sure why the park is named after Glenn Millar.

Just east of Richmond is the border with Ohio – so we’ve cycled through Indiana! We had a really fast ride to Dayton – apart from a section around Trotwood where we couldn’t find the continuation of the cycle track – so we used Garmin to get us in to Dayton and the (not very) Grand Hotel. 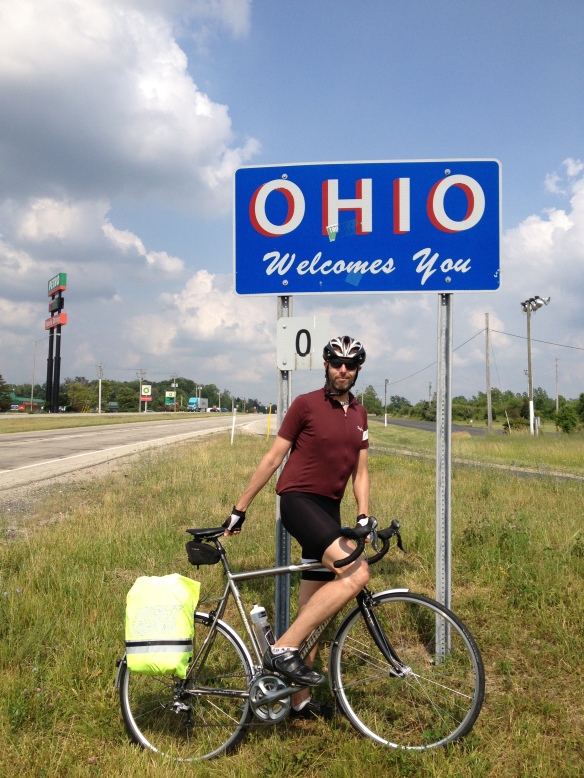 The hotel was a disaster, really. There was no laundry and the laundry service collected at 8 am then returned at 5 pm. Well that was never going to work for us! We were told that we could walk 5 blocks to a laundry. I asked about soya milk for breakfast, (I wouldn’t expect this in a remote, out of the way hotel – although some of these do routinely stock it – but in a large city-centre establishment it’s pretty standard nowadays). Well the answer to that was no, too. We could go to Kroger’s – about a 15 minute drive … we were standing in the lobby wearing Lycra and with BICYCLES – did they think we’d just pop out and rent a car? When the absurdity of driving to Kroger’s was pointed out, some other smaller local grocery stores were suggested. I had absolutely no confidence that any of these would stock soya milk. Also, I do sometimes resent -in effect – being asked to pay twice, once when we book out hotel where I assume I’m subsidising all the people who eat animal products and save the hotel money by not eating very much. Then I pay again for soya milk that I buy for myself (a lot of this gets poured away because buying small quantities is nigh on impossible in the US).

I was too tired to argue – we were paying to stay there – if we had a reasonable request like a laundry or soya milk I didn’t think it was appropriate to send us off somewhere else – especially after we’d cycled so far.

In our room on the fifth floor we started to unpack. Matthew undressed and went into the shower. There was no hot water. This place was turning into Fawlty Towers! Matthew had to get dressed again so the maintenance man could come up. He who told us to try turning the taps the other way or running them for longer … duh! Then he concluded that we should be moved. So we had to repack and wait for someone to come and move us. Our new room had hot water.

We’d not eaten so we headed out to get something to eat and go see if we could find a laundry. We never did find a laundry, but we did find an excellent restaurant: Roost in the historic Oregon district of Dayton. They were really friendly and completely unfazed by my asking for vegan food, which they seemed happy to prepare especially for me. It was a real treat. We thanked and chatted to the proprietors as we were leaving, told them about our journeys and the blog. They looked up the blog straight away – and had left a comment by the next morning! 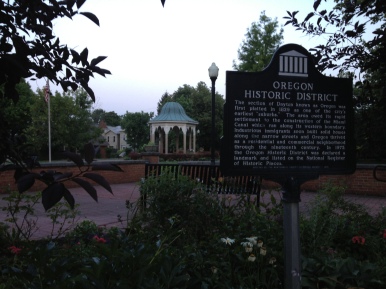 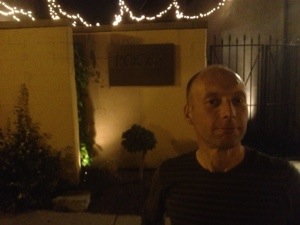 Back to the hotel to wash our jerseys in the bath! A cup of green tea and bed!