In a country with a serious weight problem building in ‘active travel’ solution (as we call them in the UK) is a ‘no brainer’. Good quality walking and cycle routes, close to where people live is a good way to get people exercising, which is why it’s good to see so many fantastic rail to trail routes. Yesterday’s Nickel Plate Trail and today’s Cardinal Greenway are just two examples of hundreds of miles of well maintained Tarmac routes in Indiana alone. What is completely shocking though is that these treasures are virtually hidden from local people. On all the trails we’ve ridden so far we have barely seen a handful of other people using them. On the Cardinal Greenway today we saw 10 people in 35 miles and two of them were maintaining the path – not cycling! Until you actually reach the trails over here there is absolutely no signage telling people they are there. In the UK most long distance cycle routes will have signed directions from nearby streets – but not here. We only found out about most of the routes we’re riding thanks to the marvellous Google Maps cycle route planner, (although it’s annoying that they don’t pay their taxes). When we’ve been a bit uncertain about where the trails start we’ve occasionally asked a passer-by, even though they’re local, none of them (without exception) knew there even was a cycle trail! A serious lesson in signage is needed – I feel a letter coming onto several US city Mayors, maybe I’ll take to the top and write to the state governor. It’s a shame that these routes are barely known about and used. 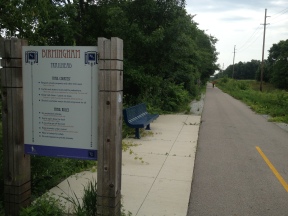 2 thoughts on “A Cardinal shame”