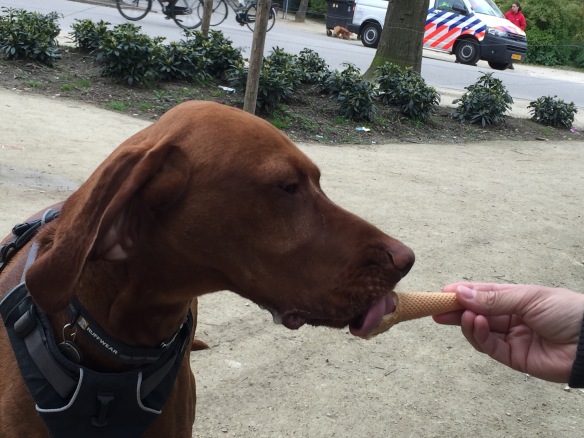 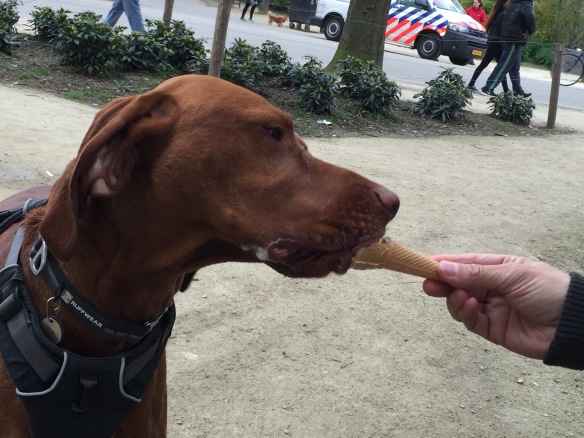 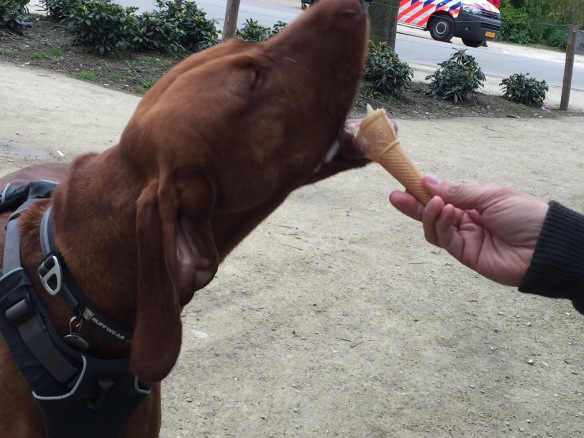 I won’t be the only one watching my weight after this trip!

We’re on the ship and heading home as I write this. The train ride from Amsterdam went smoothly once Zoly had settled. I put his blanket on a seat and he dozed with his head on my lap and my arms wrapped around him. The train was quite full and the sight of a (large) snoozing dog caused much amusement. I couldn’t quite translate what they were saying in Dutch, but I suspect it was something along the lines of ‘what a big baby’ – the emphasis on big! Thankfully the journey was only just over an hour, so the circulation in my legs just about held up under the weight of Zoly.

Mike was wishing he’d paid a visit to the little boy’s room at Amsterdam station. An hour’s train journey was pushing his bladder to the limit and one misplaced paw would have been like the dykes bursting. As soon as we reached Hook van Holland Mike rushed off in one direction to use the facilities and I went the other way with Zoly to find the nearest bush. Once the boys had had their comfort breaks we made our way to check in.
The terminal building was pretty quiet – we guessed that not so many people catch the Monday evening ferry. As we wandered towards the check-in desk we were intercepted by a friendly Dutch women. It turned out she was the check in supervisor and had the job of checking in the dogs. She took Zoly’s pet passport and checked that he was who his passport said he was. She returned shortly afterwards with her scanning device to verify Zoly’s chip and when it bleeped he looked a little surprised! I did wonder if there is a reject bleep and whether people actually try and smuggle dogs through with false passports or even try to bring dogs in disguise through.

We took Zoly to the kennel and three of his room mates were already bedded down: a lovely golden Labrador who seemed very content. Next to the Labrador a collie and opposite these two was an Alsatian who was barking furiously. Zoly isn’t very comfortable with Alsatians and this wasn’t helping to settle Mike’s anxieties. “What if he barks all night?” “He won’t” I replied – trying to be reassuring. “How on earth do you know?” said Mike. This is the standard response I expect from Mike to most of my statements. This is what I got for marrying an academic – they always expect evidence-based answers to their questions. Zoly joined in with a bit of ‘twilight barking’ of his own and I’m grateful that Kennel TV (which was tuned in as soon as we found our cabin) doesn’t have sound.
To calm Mike a little, we went for a bowl of chips in the cafeteria. Comfort eating seemed to settle Mike a little. The trouble is that ‘moment on the lips’ will inevitably turn into comments about those chips ending up on my hips! After all the naughty holiday treats we’ve been tucking into, there will be more than an inch to pinch before long. I resolve that the bad eating stops here (well after we’ve finished off the marzipan chocolate bar).