Matthew was in a very grumpy mood this morning. None of us had slept particularly well and he’d decided that it was Zoly being restless in the night, but I suspected that it was more than that – we’ve had noisy overnight storms all week so combined with Zoly’s nocturnal antics plus the fact that Matthew just never stops meant that he was suffering a bit. And when Matthew is suffering from tiredness, everyone else better watch out! Discretion being the better part of valour and all that, I decided that I should make myself and Zoly scarce and take off on a day-long hike. I like to ‘join things up’ and since we’d walked from our cottage in Metherell to Cothele and then followed the Tamar Valley Discovery Trail along the River Tamar as far as Calstock, I wanted to do the next few ‘sections’ of the Trail – heading north through Gunnislake, then west via Bitthams, Chilsworthy, Latchley, Greenscombe Wood, Luckett as far as Old Mill, where we could turn south and over Kit Hill and back through Harrowbarrow to Metherell.

The weather today  promised to be fine (at last) and Matthew hadn’t really been able to spend very much time in the gardens at Cothele so he walked with us until we arrived there.

It was nice not having to be wrapped up against the rain and on the walk through Cothele Quay into Calstock everything looked so much brighter. 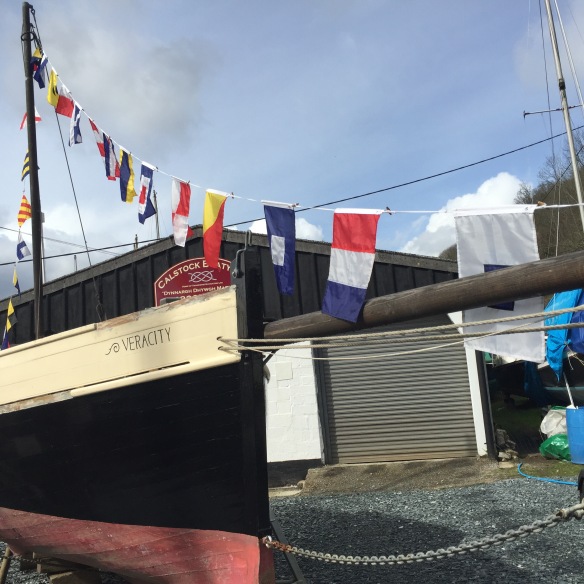 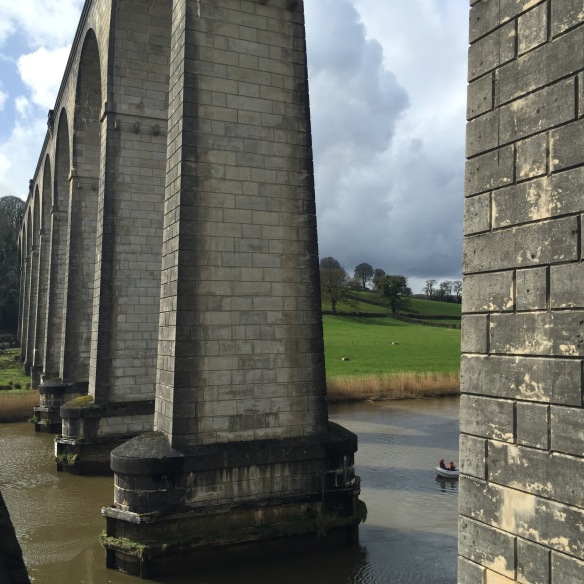 We’d been as far as Calstock church on a previous walk – it’s sited high above and quite a walk away from the town. We’d wondered why it was so far away from where everyone lived until we discovered that in 2007 a team of archaeologists from the University of Exeter had uncovered the remains of a Roman fort surrounding the church – it would have been big enough for 500 soldiers and is the furthest south west that Roman remains have been found. I figured that the church was probably where it was because it was built from stones that had been nicked from the Roman fort! 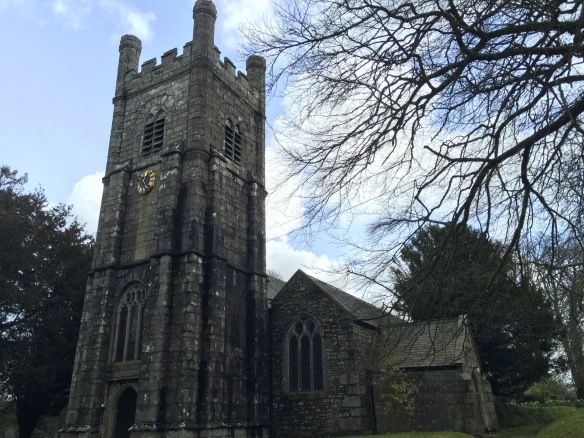 Once we passed through Gunnislake the valley sides became steeper and narrowed as we headed further upstream – after all the rain the river was incredibly high, very fast flowing, foaming and churning  – I was concerned to keep Zoly away from the edge.

The Tamar valley is so beautiful around here though – cliffs and forests, weird and rocky islands everywhere and the whole area is characterised by ruined Cornish mine workings being reclaimed by nature  – tall engine sheds built from stone with high round chimneys, abandoned workshops and crushing sheds, piles of spoil and fenced off shafts. Most of the mines were for tin, copper, arsenic and silver. 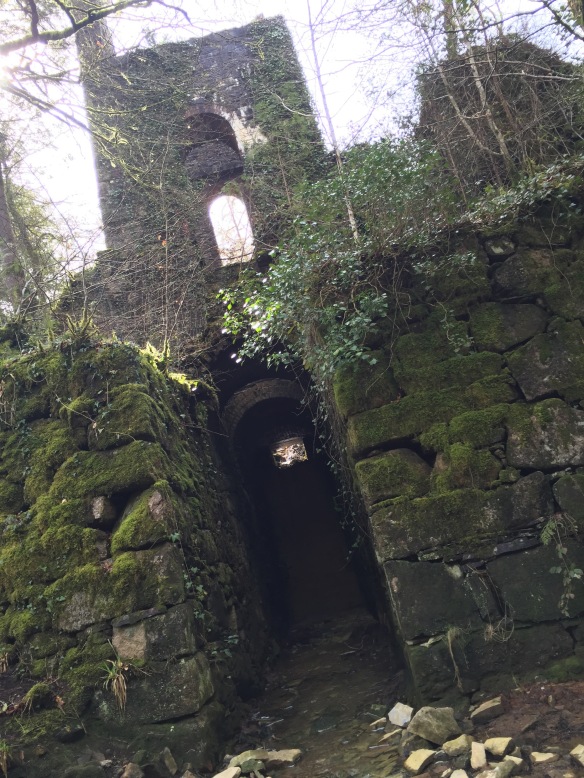 We came across a couple of really nice-looking little holiday lets above the River in Chilsworthy, they had amusing names!

Also, a rather inviting place to stay in Latchley – we just need to check out their dog-friendly credentials before we make a booking (although just about everyone seems to have a dog around here, plus vegans are always animal-friendly, so this place is probably a safe bet). A man pushing a wheelbarrow in the village said: “That’s a fine-looking hound”as we passed.

The walk up to Kit Hill was challenging as it was very steep and near the end of our walk. But it was worth it for the amazing views. All the way to Plymouth looking south and over to Devon in the east. 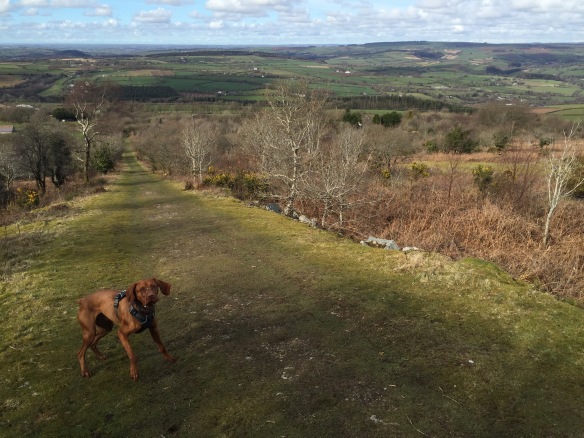 There was a quarry high on the hill a stones used in the Bishop’s Rock Lighthouse in Scilly as well as six London bridges over the Thames (Lambeth, Putney, London, Chelsea, Blackfriars and Waterloo). 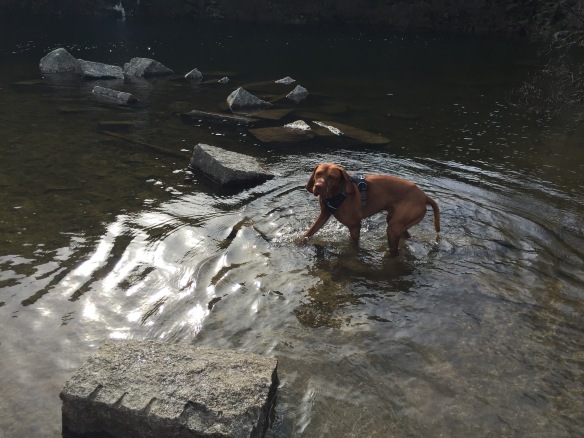 A stone monument at the summit of Kit Hill can be seen for miles, from a distance the mess that’s been made of it through having various bits of communications equipment strapped to it isn’t clear. I think it’s a shame the work couldn’t have been done more sympathetically.

We came off the hill for the short walk back to Metherell – we called in to the farm shop in Harrowbarrow for some well-earned ‘premium’ cooked Cornish ham for Zoly, we arrived two minutes before closing time – phew! Lucky boy. 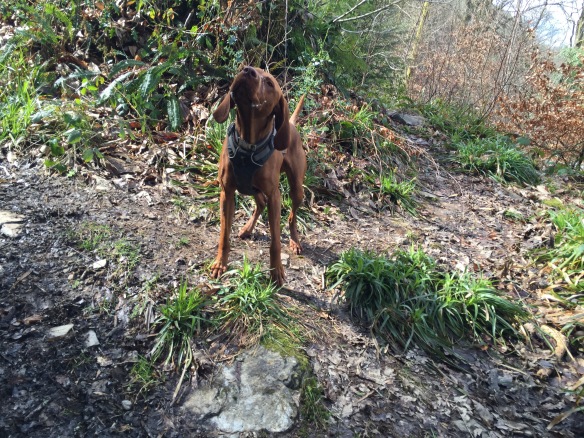 1 thought on “Mike and Zoly larking about”