The general election here in the Berwick constituency has got off to a flying start. Well when I say flying, I mean flying in the kind of way of those people who dress up in fancy dress with wings attached and then launch themselves off seaside piers. In truth, you’d barely know that there is a general election taking place. We’ve seen one large ‘Vote Conservative’ hoarding on the gate posts of a not insubstantially sized house (it’s probably where their candidate lives) and then there is the previously mentioned Boris Johnson (that well known north east politician) ‘I’m backing the let’s dual the A1 campaign’ poster in the centre of Alnwick outside the Conservative and Unionist offices (no pictures of David Cameron there though, funny that). 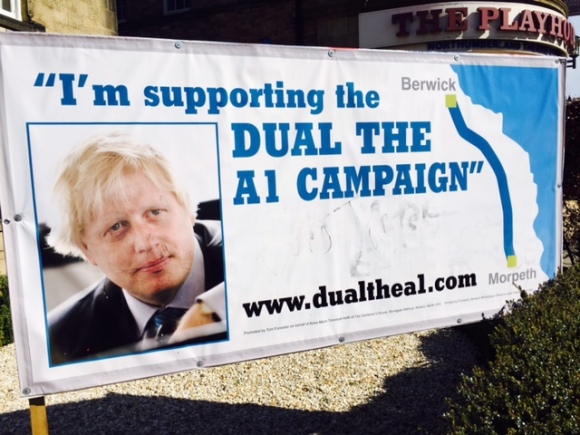 Boris loves nothing better than a blast up the A1, and they talk of nothing else in Uxbridge and South Ruislip

But just when you thought the election was going to pass unnoticed, it all gets a bit exciting (ok I may exaggerate a bit). Today on our way back from Morrison’s we came upon Iain Gordon, an independent candidate with his very own ‘battle bus’ (ok battle Renault) in the centre of Alnwick Market Place. So what is Iain Gordon of the ‘Fair Society Party’ standing on a platform for? According to the Northumberland Gazette – ‘Explaining his party’s policies, he said that they are fighting for “£10 an hour minimum wage, 50p off a pint of beer, 50p off a bottle of wine, no taxation under £16,000, £20 per month for every foreign registered car on our roads, £200-a-year annually and free parking in hospitals”.

Unfortunately Iain Gordon didn’t get much time to convince many voters of these pledges (or potential candidates – he is apparently at present short of one for the Berwick constituency where Alnwick is situated as he’s standing elsewhere). Shortly after arriving in the Market Place a civil enforcement officer slapped a parking ticket onto his Renault for flouting the new (and ‘wholly unjust’ parking restrictions – that is according to yesterday’s Northumberland Gazette) that have been introduced in Alnwick Market Place.

The police soon arrived to escort Mr Gordon from the scene, his campaign placards left in a heap in the middle of the Market Place – I expect he’ll get another ticket for littering, the price of democracy eh?