It’s US Independence Day! We’re not sure how they’ll feel about two British guys arriving into Washington, D.C. today! Hopefully we’ll be fine, providing we don’t appear to be playing with any matches!

When we got up Mike (McL) had yesterday’s Tour de France stage replay on tv – so we watched that over breakfast. Then the broadcast carried on to today’s stage … it was going to be very hard to turn my back on that – but a short ride to Washington awaited and maybe a trip to the Smithsonian Air and Space Museum on the Mall!

We left at 10:00 for a very gentle ride to DC. We went past the restaurant that we’d eaten at last night in Clarkesville and a just afterwards had puncture # 6 (Mike front – a small shard of glass went through the tyre). Once the puncture was repaired and we were in our way again we took Route 108 to Highland, then Brown’s Bridge Road. It was really quite semi-rural with lots of big detached housed surrounded by massive clipped lawns and lovely gardens – almost everywhere we could hear buzzing noises and there were people using sit-on lawns mowers and strimmers! We descended to a bridge over the Rocky Gorge reservoir, then on Ednor Road, Layhill Road – past Northwest Park Golf Course and over the I-370 into the start of the built-up area at Glenmont. Now lots of stops and starts at junctions along Georgia Avenue, through Wheaton, Forest Glen and under the Beltway (ring road) through Silver Spring. The houses were becoming grander and interspersed with lots of churches, a beautiful National Synagogue, parks and some minor embassies as we rode closer to Downtown. 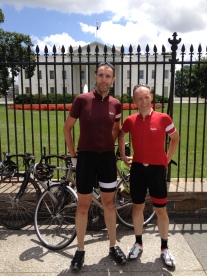 Still two miles out and Matthew spotted the very top of the Washington Monument in the distance – the obelisk is the tallest freestanding stone structure in the world. As we approached we could see more and more of it.

It was with a real real sense of mounting excitement that we approached Washington – partly because it’s so famous, we’ve never been before, it’s almost endlessly iconic and of course it represents the final stopping point on our journey.

The road we were on – 16th Street – passed Rock Creek Park, which ended at Lafayette Park – and suddenly we could see the White House right there in front if us! Just Amazing.

Matthew was given a free tub of ice cream for Independence Day!

We saw some of the parade balloons and floats and marching bands. Then we went to the Lincoln Memorial for more pictures and back to the hotel.

After we’d cleaned up we took the metro to Chinatown and walked to the Air and Space Museum :) 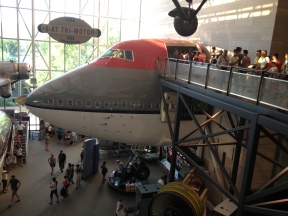 The first incredible thing that it’s possible to do at the Air and Space Museum is touch. a piece of Moon rock!. They also have the actual Apollo 11 command module, (the cone piece that brought the astronauts back to earth and that parachuted into the sea); a lunar module, (LM-2, which was a backup); the Wright flyer; The Spirit of St. Louis, (Charles Lindberg made the first solo flight across the Atlantic in 1927); a nose section from a Northwest Airlines Boeing 747, ( it’s possible to visit the flight deck); an Eastern Douglas DC-3; the plane Amelia Erehart flew solo across the Atlantic in, (the first woman pilot to do that). They had lots of first and second world war planes – including a beautiful late-design (mk-4) Spitfire. A Messerschmitt 109, a P-51 Mustang, and a Japanese Mitsubishi A6M Zero.

Mike (McL) brought our bicycle bags in to Washington for us so that we could cycle in. He left them at our hotel and then we met up again at a branch of Chop’d – a fast food place that specialises in salads. After dinner we walked back to the National Mall to watch the 4th July fireworks. They began at 9:10 and lasted for 20 minutes. Huge crowds were sitting on the grass of the National Mall and in the streets around. We found a fantastic spot near the base of the Washington Monument. The fireworks didn’t disappoint – they were launched from the reflecting pool, which was just in front of us – some even became gigantic letters in the sky when they exploded – a U, then an S then an A – the crowds went wild with delight when they saw that. Music accompanied the fireworks, too – with a USA theme. It was all free – worth coming to Washington on the 4th July alone for!

We walked back to our hotel, had a drink in the bar, then it was time to say thank you and goodbye to Mike (McL). He’s been a superb companion on the trip from Pittsburgh to Columbia – helping us to keep the pace high, keeping the conversation going, making excellent suggestions about the route and what to see. Then he was a wonderful host – showing us some of Baltimore and Colombia. I feel proud of him. It was sad to see him go and we’ll miss him. Thanks Mike! Already we’re starting to wonder if we’ll get to see him in San Diego next year as that’s where his work is taking him next!

Tomorrow is our last full day in Washington – for this trip. I fear that it might be dominated by Matthew and shopping!