We’ve discovered a new (if rather tenuous) link between Pittsburgh and Bristol. The baseball team here in Pittsburgh are called ‘the Pittsburgh Pirates’ while in Bristol one of our (rather rubbish) football teams, (that’s soccer to out US readers), Bristol Rovers are also called ‘the Pirates’. As we cycled out of Pittsburgh this morning we passed PNC Park, the home of the Pirates – a rather more impressive stadium than the Bristol equivalent.

There was a baseball game here last night and the stadium was lit up so brightly you could see it all over town. Our host Patrick was taking us up to Mount Washington to see the city skyline at night. On our way we realised that there were going to be fireworks at the end of the match. We caught a glimpse of the fireworks as we drove up, I couldn’t help thinking the Americans know how to put on a show, you’d be lucky to get an inflatable banana at the end of a Bristol Rovers match. 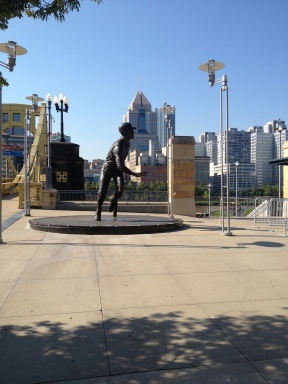