Yesterday (28 June) is exactly one month since I started my new job as Boater Liasion Manager with the Canal and River Trust (CRT). You’re probably thinking: ‘What? You started a new job and then went on holiday three weeks after joining?!’ I know, I felt a bit bad about that, but this trip was planned and booked months ago before I’d even seen the job advertised. If my new boss – Sally – is reading this, thanks for being understanding and be assured I’ll work hard to make up for it when I get back!

Anyway, even though I’m on leave I can’t escape canals completely. There are not many canals here in the USA – well not compared with the 2000+ miles of them we have in the UK. They do have some big rivers, (many with super-scary bridges you have to cycle over). Even though the canals are not easy to come across, we’ve managed to find one – or I should say the remnants of one. Just half an hour after leaving Newcomers Town yesterday, we passed a road sign that said ‘Lock 17, Chesapeake and Ohio Canal’, we had to stop and have a look didn’t we? (Mike thinks I’m turning into a gongoozler – the canal equivalent of a train-spotter!). We pulled over to take a look at a stone wall that we though we’re probably part of the old lock.

As we stood looking at them a young women outside a house adjacent called out ‘Can I help you?’. We explained why we’d stopped and Kelly said ‘hold on there, I have a picture to show you’. She went inside and came back with a black and white copy of a photo taken around turn of the last century showing lock 17 in all its glory. With the exception of one white wooden building there was nothing else left that was recognisable from the picture. Much of the canal fell into disrepair following major flood damage in the 1920s and 1930s and only parts of the eastern section of the canal now exist and form part of the cycle route from Cumberland through to Washington, we’ll see some of the remaining canal when we get to Washington but we’re taking to road from Cumberland as the towpath is apparently a bit muddy and rutted for our tyres. 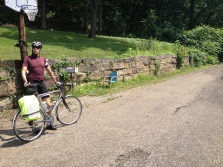 If you’re interested, here’s a bit more history about the canal;

The Chesapeake and Ohio Canal, abbreviated as the C&O Canal, and occasionally referred to as the “Grand Old Ditch,”operated from 1831 until 1924 parallel to the Potomac River in Maryland from Cumberland, Maryland, to Washington, D.C. The total length of the canal is about 184.5 miles (296.9 km). The elevation change of 605 ft (184 m) was accommodated with 74 canal locks. To enable the canal to cross relatively small streams, over 150 culverts were built. The crossing of major streams required the construction of 11 aqueducts. The canal also extends through the 3,118 ft (950 m) Paw Paw Tunnel. The principal cargo in the latter years was coal from the Allegheny Mountains. The canal way is now maintained as a park, with a linear trail following the old towpath, the Chesapeake and Ohio Canal National Historical Park.