It was raining fairly heavily when we woke at 5 this morning, so our plans to leave early were quickly amended. The rain prevented Melissa from having her morning run, but at least it gave me the chance to ask her about her studies in England. Brook couldn’t remember where it had been. However, Melissa told me that she had gone to Leeds! She mostly attended philosophy lectures there, but didn’t remember a great deal about the city. We put that down to over-consumption of cider!

When I’d been showering in the bathroom last night I noticed that water was constantly running out of the toilet cistern and into the toilet bowl. I’m sorry – I’m just the kind of man who notices this sort of thing! I’d been fretting about the waste of water all night – I knew that it was probably an easy thing to fix, but even I wasn’t about to start doing DIY in someone else’s house! I asked Brook how they paid for their water and she told me that water bills were included in their rent. I said that I’d noticed the water running out of the cistern and she’d noticed it too, but thought it only happened immediately after flushing. I said that it was constant because the cistern was overfilling and that it should be possible to fix the by turning the screw on the opposite side of the float to lower it further into the cistern and shut the water flow off sooner. She immediately went to find a screwdriver and was off to fix it! When she’d fixed it, she was delighted. She said that if I achieved nothing else on my trip across America, I should be happy that I stopped an overflowing cistern! I think that my dad would have been quite proud of me!

We had to rearrange our plans for today. Our intended Warm Showers host had emailed us to say that unfortunately they were not able to host us tonight after all. We were looking forward go it – a cabin by a lake! But they had warned us that the people staying there might want to stay on and so it had turned out. It wasn’t a problem and we booked in at the Hampton Hotel in Newcomerstown.

By the time we left it was 10, but the rain had eased and we experienced intermittent showers for most of the morning.

Getting out of Columbus was straightforward – out along Indianola Ave then Morse Road (!). We found the Alum Creek trail and headed north-east towards Westerville and the Hoover Dam, (another one). This was a very different track from the ones we’ve been on so far – it was narrower and curving as it followed a river valley. The sides were very heavily wooded with grasses and ferns around the base of the trees. It was cool and damp and felt quite European. 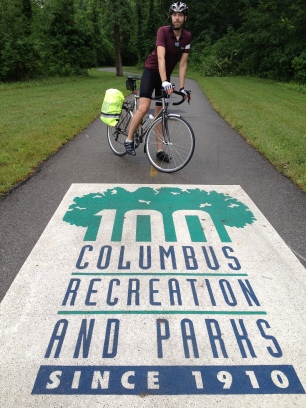 We’d travelled about 10 miles and had been chatting amiably when Matthew said that he had some exciting news. “What’s that?” I asked. “I’ve managed to trace some bicycle-shaped cookie cutters, they’re in the USA and I’m going to order them and have them sent over to Michael’s.” I said that wasn’t really what I was expecting when he told me that there was some exciting news! Poor Michael, he’s becoming something of a convenient poste restante and forwarding service for us all – I’ve already arranged to have some bicycle transfers sent to him. Our bags are going to him and now some bicycle-shaped cookie cutters!

Ten miles further on and we were talking about out rest day in Pittsburg on Saturday. Matthew said “I found out something exciting about Pittsburg.” My heart sank – not more bloody cookie cutters! “No”, Matthew said, “There’s an exhibition at the Carnegie Science Museum in Pittsburg and it’s called the … Science … Of … The … Bicycle”.
Now that IS exciting!

By this time we’d gotten to the Hoover Dam, it was really spectacular with water gushing out of the bottom. There were several cyclists about and people running too. Seeing the runners reminded me of email that I received yesterday from Berlin marathon organisers telling me that there’s three months to go. I looked at it and thought to myself “What on earth am I doing cycling through the mid-west when I should be in training for a good marathon time?”

The area beyond the Hoover Dam was beautiful – forested rolling hills. We cycled past an enormous deer that didn’t disappear into the trees until we were really close.

We took Central College Road through New Albany; many of the roads seemed new or to have been resurfaced and they were very smooth – perfect for cycling on. It was drizzling on and off by now – but that kept things cool and we didn’t mind it. There were lots of recent, (or not quite that recent but unsold) properties around with some odd-looking landscaping – a bit like a huge golf course with new houses all over it – lots of grassy knolls, ponds and impressively high fountains that perhaps wouldn’t have been so out of place in a city centre, but this was quite rural, so it all seemed rather incongruous). Along the verges there were masses of orange hemerocallis daylilies and tall dusky light blue cornflowers – beautiful.

We joined the TJ Evans bicycle trail at Alexandria. The trail is adjacent to the Racoon Valley Road, (there were no racoons that we could see), and on in to Granville, where we watched a bunch of men and women doing boot camp exercises (sorry no picture – they were big!). We changed to the Cherry Valley trail – over a lovely light iron bridge that crossed a steam – and on in to Newark, passing an amusing cycling sculpture. 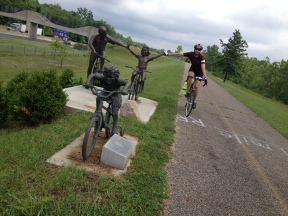 Newark is a pretty town, we did a little circulation of the main square to try and find somewhere for lunch. The square is attractive, (but really spoiled by too much traffic). There’s an imposing 1876 Second Empire style courthouse faced in limestone and set in open gardens in the middle of the square. The courthouse has a clock tower that dominates the town, with a copper-coloured roof and statues of justice.

The square also has a lovely 1920s (Midland) theatre, recently renovated by the look of it. Outside the box office there’s a statue of Mark Twain on a bench. (There are bronze statues of ordinary people going about their business all around the town we noticed). Also in the square a Downtown Cycles – a new and welcome addition according to a father and son who were exiting the shop as we were outside admiring it. On the corner near the bicycle shop a lovely building: The Home Building Association Company – a little jewel box of a building. It’s early twentieth century, originally a bank, it has gray-green terra cotta slabs that are edged with border designs, the whole is heavily ornamented and these included a winged lion! The building looks empty and neglected now, which is such a shame. 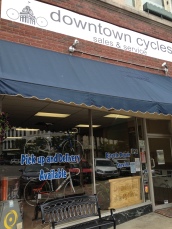 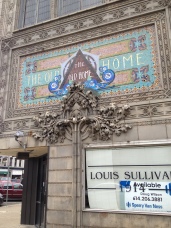 It was almost impossible to see past all the cars and admire the nice buildings in the square without risking ones life and stepping into the road. The whole square would benefit most from preventing traffic using it as a through way, narrowing the road to single-lane and creating more calming, open-spaces would turn this into a really more attractive place to shop and eat and chat. I don’t suppose they will do this though – car is king and all that.

On our second turn around the square we picked out Simply Rising Café for lunch. I was really pleased with our choice. It’s been a bit if a challenge here in the mid-west to find non-meat, non-dairy/egg food. First of all Simply Rising Café stocked soya milk. Wonderful. Then they had an avocado, black bean and mango salad. Heaven! Matthew had a baked potato and saw a cinnamon roll in a glass case, so asked for one of those. We sat outside in the square and the cinnamon roll arrived first – it wasn’t one from the display, it was huge! And covered in frosting. I burst out laughing. Matthew said that he might leave half if it – he didn’t of course!

We talked with the proprietor and his wife – Edward and Seraphina. They were married recently and had only been running the café for about a year. Congratulations to them both! Edward said they has had lots of cyclists visiting, (I’m not surprised, we’re quite a discerning bunch, tend to be better off and Simply Rising Café was by far the most attractive place we’d seen to stop by at). He talked about setting up a bike rack outside the café – a very good idea and there was already a really nice-looking blue one a little further along the road, with a chainring shape attached to it. I suggested to Edward that maybe he could work with the bicycle shop proprietor to promote some Tour de France screenings in the café! (Only two days to go – now that is exciting!) 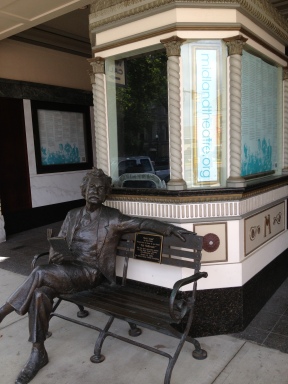 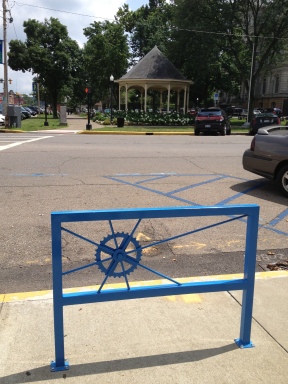 There are some ancient native American earthwork circles in Newark, one is the same size as the base if the Great Pyramid. We didn’t really have time to visit and storms were threatening, so we continued on – passing by an extraordinary-looking building that was made to look like a shopping basket! This we later found out is the headquarters of the The Longaberger Company, who happen to make baskets! (More on them and the building here: http://www.longaberger.com/homeOffice.aspx

On through Hanover and into Frazeyburg. The Frazeyburg town sign indicated that a lock on the Ohio and Erie Canal had been in the town. I remembered reading on the information boards about the 1913 flood in Dayton that many lock gates on the canals were blown up to speed the flow of water away from the area. Many sections of canal were also washed away and I wondered if this area had been affected then. Just outside the town and by the road we passed a big stone channel that was overgrown and I thought that could have been part of the canal. While I telling Matthew about that, it started to rain! just a bit of spotting at first, but it rapidly went dark and quite soon we were inundated. A car drive past – too fast – and sent a massive wave of warm water over me. I was completely soaked through. I couldn’t help wondering if they’d done it on purpose – either that, or they just didn’t care. 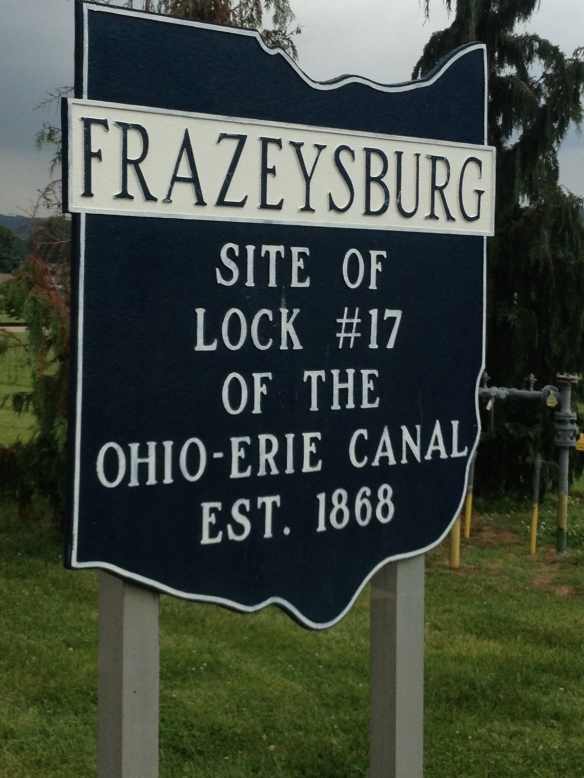 On top of the rain, puncture #3 Mike, rear. It seemed to be quite slow, so I just put some air in the tyre and topped it up until we arrived at our hotel. The rainstorm ended – it brightened and actually we dried up quite quickly.

There were no more cycle trails today, so we followed Garmin’s directions along quiet roads through Adams Mill, Conesville, Coshocton – some hills! Along the Tuscarawas River, through West Lafayette and into Newcomerstown and the Hampton Hotel. 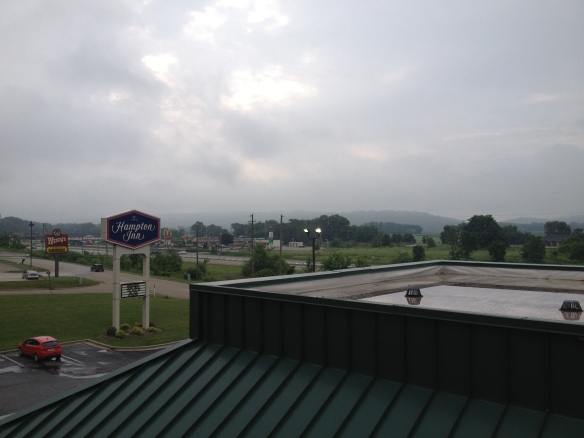 The Hampton Hotel wasn’t near a grocery store as we’d expected – just a BP petrol station, a McDonald’s and a Wendy’s. So no soya milk and nowhere that I would go to eat. But we’d just cycled almost 100 miles – we were hungry! In the room there was a local guidebook with an advertisement for a local pizza place that would deliver to the hotel. I ran and ordered a vegetable pizza – without any cheese. They could do that! Bought pizza dough is almost certainly not vegan, but it was the best we could do.

We ate our pizza and caught up with some podcasts of recent episodes of The Archers! Ah, the good life!