The great thing about cycling across the USA is that you meet so many really nice and interesting people. Whether it’s people on bikes, walking or those who just start talking to you as we stop outside a shop. People are always interested (and usually amazed) to hear about where we’ve been and where we’re going on our bikes. We always get asked where we’re from and reply ‘Bristol, England’ followed quickly by ‘it’s about an hour and a half from London’. Bristol is sadly not that well known around the world (or even the UK for that matter – we like to think of our (adopted) home city as the ‘best kept secret’. If you’re reading this (whether you’re in the UK or somewhere else in the world) and you’ve not visited Bristol, you should! We are very proud of our city, its very beautiful Clifton Suspension Bridge and the world’s first iron-hulled propellor-driven Atlantic passenger ship – both designed by the 19th century engineer Isambard Kingdom Brunel. Bristol is also a very creative city and was where the supersonic plane Concorde was built. The Hollywood film star Carry Grant was also from Bristol – we have a statue of him. More recently the city has become associated with the graffiti artist Banksy who grew up in Bristol and the Oscar winning animator Nick Parks and the firm Aardman Animation. Nick Park’s most famous creation is the wacky inventor Wallace and his dog Gromit (who normally rescues him from scrapes and capers). If you like Wallace and Gromit then this summer is an excellent time to visit Bristol as 80 five feet high statues of Gromit, each decorated by a different artist, are being installed around the city. The trail is to raise funds for our Children’s Hospital and at the end the statues will get auctioned. The Gromits are being installed as we speak, so when we get home they’ll have landed all over town, and as Wallace would no doubt say – they’ll look ‘cracking’! 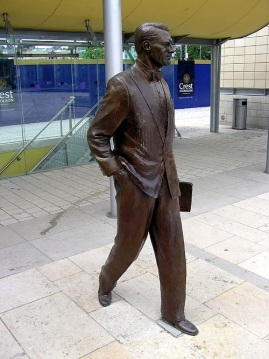