The image of the USA that we’re fed in Europe is often very far removed from the experiences we have when we cycle here. The news and cinema footage would have you believe that Americans are all red-neck, gun-touting, inward-looking, aggressive people who drive giant cars and who are stinking rich. It’s true that their cars are generally the size of small British houses, but they drive much slower than maniac UK drivers and the roads are much wider so you feel quite safe on a bike. The people we’ve met on our trips dispel much of the conventional stereotypes we’re fed in the UK. All the Americans we’ve met have been generous to a fault, extremely interested in our travels and to hear about the UK and Europe and have much more progressive political views than many media commentators back home would have us believe. As for being wealthy, yes there are lots of well off people, but there is also a lot of poverty too. You notice this travelling on a bike where the broken down and boarded up houses stand out amongst the neatly trimmed lawns and white picket fences. In some of the small rural towns we’ve travelled through its been quite stark to see the poorer neighbourhoods and closed down shops on Main Street whilst on the outskirts of these places are miles of sprawling retail sheds and fast food joints. Some parts of the ‘American Dream’ are clearly not working for everyone. Cycling along I can hear the voice of Matt Fry (former BBC USA correspondent now at Channel 4 news) talking about ‘the other America’ – the poor America that is plain to see in the richest nation on earth. Rich or poor however, Americans are warm and hospitable, if this could be translated into cash they’d all be wealthy. 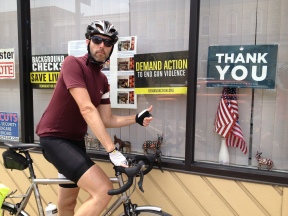 2 thoughts on “The other America”