The Windy City in question, is of course Chicago – and as the song goes ‘It’s mighty pretty’. Well, from what we’ve seen of it so far. It isn’t actually that windy, (fortunately), and the title originates from the nickname given the city when it was not too shy of promoting itself as part of the 1833 World’s Fair, (also the term is possibly related to the reputation of Chicago’s politicians for talking a lot!). We won’t get to explore properly until tomorrow when our host Bonnie has promised to take us on a cycling tour.

Bonnie’s apartment is located just south of the city centre and a stone’s throw from the shore of Lake Michigan, a bridge over the railway line and underpass below the freeway and you’re on the Lakeside Cycle Trail – 18 miles of traffic-free route. We’re about to have dinner with Bonnie and her friend Frank, who is kindly cooking us a vegan meal. After dinner I think it will certainly be bedtime, we’ve been awake since 4 am. Although it’s 20.15 here in Chicago, it’s actually about 2.30am in the UK – well past my bedtime (for the second day in a row!). 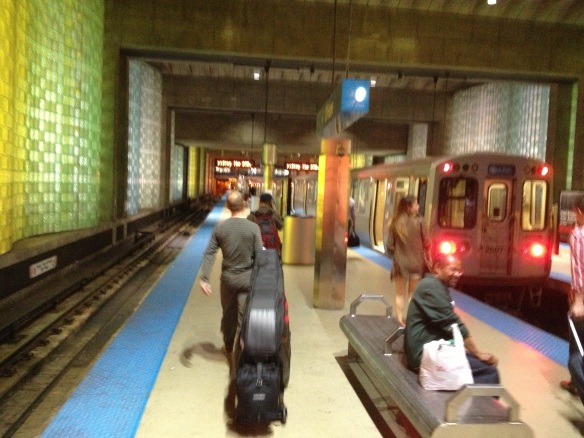 3 thoughts on “We’ve just flown into the Windy City!”