My delusion of gliding around the Midland Hotel pretending I’m an extra in Poirot have been unceremoniously shattered. In my attempt to get a close up shot of the seahorse sculpture on the front of the hotel, we headed up to the roof terrace. As part of the refurbishment/restoration of the hotel an additional level was added where the outdoor roof terrace once existed. However, the additions are sympathetic and light – lots of glass, and there’s the problem. I thought I was heading for the roof terrace through an open window, when in fact I was about to head-but a floor to ceiling piece of glass (fortunately toughened glass). Fortunately there weren’t too many people around, however there remains an interesting ‘face print smear’ of mine on the glass. I am now escorting a cut to my nose caused by my sunglasses, a bump to my forehead and knee, sore front teeth but worse of all embarrassment. More casualty extra than costume drama. 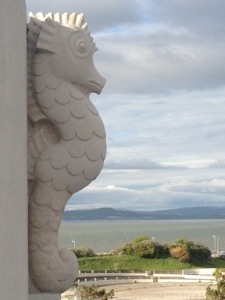 As part of our training for the ride between Chicago and Washington DC later next month we’re spending this weekend doing a sea to sea ride. Our starting point is Morecambe and out final destination is Bridlington.

To be honest we’ve been wanting to visit Morecambe for sometime, not for the scenery, cockles or even the statue of Eric Morecambe – but rather to visit the restored Art Deco Midland Hotel. Originally built in 1933 by the London Midland & Scotland Railway Company, the Streamline Moderne style was the height of fashion.

The hotel was furnished with sculptures by Eric Gill. Sadly the fortunes of the hotel dwindled, first requisitioned by the navy during WWII, then neglected under the nationalised railway, the hotel finally closes in 1993 and sadly fell victim to vandalism. For several years it was at risk of demolition (the fate of the splendid Morecambe Lido neighbouring the Midland), but campaigners and forward thinking developers Urban Splash successfully rescued and restored the hotel, re opening it in 2008. So there could hardly be a more fitting place to begin our mini-break. Before we embark on three days of Lycra clad exploration, we’re enjoying dinner watching the sun set over Morecambe Bay, a pianist serenading us and, just for a moment, pretending we’re in an episode of Poirot. 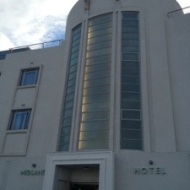 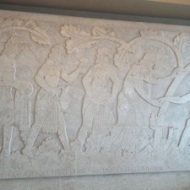 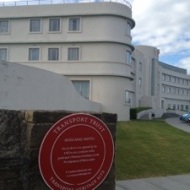 Our blog about our C2C ride from Morecambe to Bridlington starts here!